The country is known for its exquisite serving of desserts, ranging back to the ancient days of French and British settlers. The recipes have evolved with time and ingredients have been added, but the rolled down the idea of some desserts remain the same.

People who have a sweet tooth, only understand the true importance of desserts. While others have dessert as an after a meal or for the sake of it, people who are sweet enthusiasts take great pleasure in tasting and understanding different desserts across the planet. If you are such a person who respects and explores a variety of desserts, then Canada will be a heavenly journey for you. The country is known for its exquisite serving of desserts, ranging back to the ancient days of French and British settlers. The recipes have evolved with time and ingredients have been added, but the rolled down the idea of some desserts remain the same. In fact, for certain recipes, the procedure or ingredients have not changed even a bit! In most of the cafes and restaurants in Canada, you will find a wide range of baked/non-baked desserts to explore. Make sure you get your hands on the best ones!

Different regions of Canada specialises in different desserts. Here is a curated list of all those desserts that recognise Canadian culture and tradition. If you happen to come across any of the desserts mentioned below, give them a try. Bon Appetit!

Canada has multiple types of Visa, the easiest being Canada ETA or Canada Visa Online.

As you step into the east coast of Canada all your eyes will rest upon will be Butter Tarts. Starting from the well-known bakeries in town to a common store, every place smells of warm butter tarts, warm enough to melt you. The Tarts are made out of dough, generally sweetened with maple syrup and are found on the tables of every happy occasion occurring across Canada. The tart forms a traditional food of Canada and has been there for ages, the recipe was handed down to the younger generations from their peers and their peers again got it from their predecessors. The tart is a common delicacy known by and prepared at every home in Canada, almost all grandmas know how to stir the pot and quickly prepare sweet Butter Tarts for their families.

READ MORE:
Anybody visiting Canada for the first time would probably want to familiarize themselves with Canadian culture and society which is said to be one of the most progressive and multicultural in the Western world. Guide to Understanding Canadian Culture.

The fun part about Nanaimo bar is that this dessert is not baked and is considered one of Canada's most iconic and spectacular desserts. The recipe and name of the dessert hail from the city where it was invented - Nanaimo British Columbia, situated on the West Coast of Canada. A thick layer of sweetened custard is sandwiched between two thick layers of chocolate ganache. If you are a fan of chocolate desserts, then this delicacy is a must-try for you. It is a triple-layered heavenly treat for dessert lovers like the butter tart.

Even the Nanaimo bar started from grandma's kitchen, later on with time and evolution, the dessert got transformed a little. But the recipe and the procedure of this dessert remains the same to date. Nowadays, they even offer you different flavours for the bar. Flavours such as peanut butter, mint, Vanilla, red velvet, Mocha and others. The Nanaimo bar was invented in 1953 as per the known records. 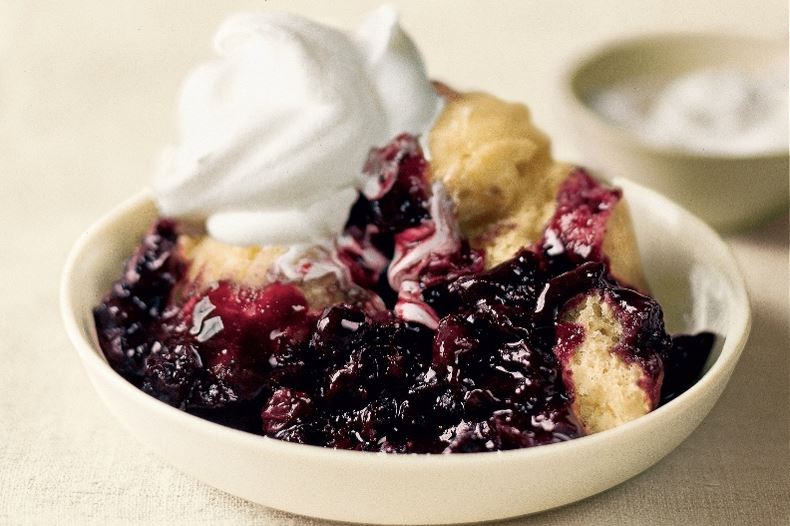 The only dessert which can get you out of your disgruntled mood is the Blueberry Grunt. You must be wondering why the name 'Grunt' has been assigned to a dessert? It is because the Atlantic regions of Canada producers tons of blueberries which when slowly cooked usually makes a grunting sort of sound and that is how it got the name Blueberry Grunt. The early French settlers had a thing for blueberries and would cook these berries into sweet desserts. One of their patent delicacies to be served on the table would be Blueberry Grunt. It is made from simple biscuits or regular dough and is a past-time summer dessert for many.

The dessert is sometimes also served with sweetened cream just to add to the overall sweetness of the ordinarily prepared blueberries. Some restaurants and cafes in Canada also serve the delicacy with a scoop of vanilla cream or chocolate ice cream.

You can assume without a doubt that a Flapper Pie is the queen of all Prairie dessert pies. It is usually prepared with a thick Graham cracker crust covering the thick creamy custard filling beneath. The pie is generally topped with fluffy cream or meringue. This heart-melting Prairie Pie was invented in the city of Alberta and was considered the best pie by what would come from the farm. This was so because the ingredients of the pie were not seasonal and could be prepared and served at any point of the year. People are still dubious about the pie's name. From where did the name Flappers come from? Was it because it was so easy to prepare that it was but a flapper's task for the Bakers in the kitchen? No one is certain of the answer but if you want to be certain of the delicious taste of the pie, then you should have a bite while you are there.

READ MORE:
What kind of weather different areas in Canada are experiencing depend also on the season that is currently playing out in the country. Canada has four well defined seasons, spring, summer, autumn, and winter. Learn more at Canadian Weather.

Saskatoon Berry Pies are very similar to Blue Berry Grunts, the only difference being in the berries from which they are prepared  Saskatoon Berry Pies are prepared from June Berries (deriving its name from the month in which it is born) and is extremely sugary in taste. The berry is rich in antioxidants and gives a nutritional boost to your body. The flavour, believe us, is a trip to the heavens. Although June berries are only found in June and July, the pie is very graciously prepared and served to the people all year round. This is because of the popular demand for the dessert. So if you happen to come across Saskatoon Berry Pie, you should give it a try.

Read everything you need to know about Canada Tourist Visa. 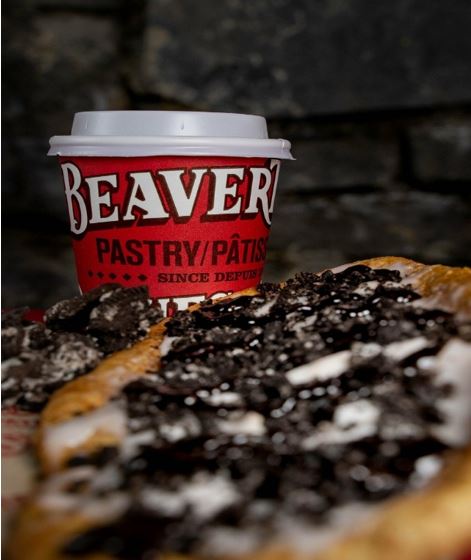 Did you know that the national animal of Canada is a Beaver? Yes, that's correct and this Beaver's Tails delicacy is prepared in the name and shape of a Beaver's Tail. The sweet is prepared from the usual dough which is then sprinkled with cinnamon powder and M&M's. The dough is first cut out and moulded in the shape of a beaver's tail and then the shape is lightly fried. The delicacy was first recognised in the year 1978 by Grant and Pan Hooker in the city of Ontario and since then the dessert has been loved and gobbled from city to city in Canada.

The delicacy even managed to attract President Barack Obama for a quick bite in his official visit in 2009. While the preparation of a Beaver Tail's is quite simple, most of its taste is developed through its toppings. While cinnamon powder topping is the most common toppings of all, nowadays, cafes and restaurants even garnish the delicacy with lemon and maple butter syrup, honey, vanilla ice cream, cheese, strawberries and sometimes even a lobster! Can you imagine the evolution of the Beaver's tail?

While the look of the desert might be enticing, it does have a dark history to its name. The name literally translates to 'unemployed man pudding' in French, meaning a poor man's pudding. The dessert was developed by female workers in factories during the time of the Great Depression in Quebec. The preparation of the dessert is nothing extravagant but extremely simple and tastes primarily like a cake. Before serving the delicacy, it is bathed in either hot caramel or maple syrup which helps the cake to moisten and melt.

The cake is a very common delicacy served and consumed all across Canada, not just in restaurants and cafes but also prepared by men and women at home. A very common and necessary serving at every happy occasion in the country. If you develop a taste for the dessert, you too can learn its preparation and try it out at home!

This patent frozen dessert of Canada is impossible to find anywhere else in the world. The dessert is served as Orange ice cream which is wrapped with ribbons of black liquorice to create an impression of a tiger's stripes. The ribboned ice cream gained fans across Canada at ice cream parlours through the period of mid-late 20th century (the 1950s-1970s). Although the dessert is now out of the market and is not exactly a favourable dessert choice, even today it is still sold by large retailers like Kawartha Dairy and Loblaws. This is not because is public demand but a chance to some who still wish to dwell in the nostalgic magic. If you happen to visit Canada, you can surely try this disappearing delight once. 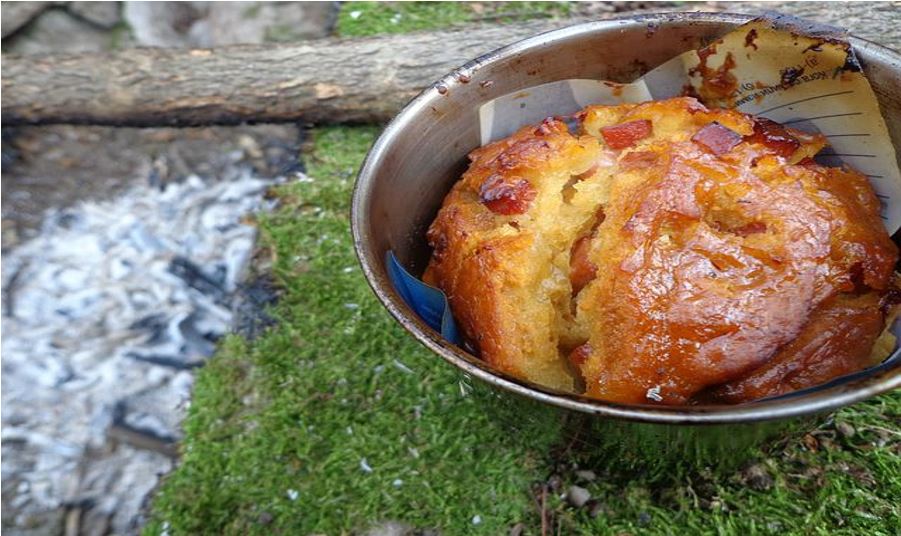 Sweet Bannock is the ultimate go-to food of the Canadians. It is that sugary delight that will instantly make you feel better no matter what your situation might be. The dish is prepared in a very simple and elegant manner, using plants, corn, flour, lard, saltwater and other ingredients as per the cook's discretion. This particular dessert of Canada is found all across the country and is also a common homemade delight. Before serving, the dessert is garnished with cinnamon sugar and the bread is baked with fresh berries. It is a very old dish and the recipe was developed early in the 1900s. If you wish to have something which is not so sugary and also serves the purpose of sweet dessert, then you should totally go for Sweet Bannock.

The Canadians owe Tarte au Sucre to their French heritage. The delicacy originated in the province of Quebec. Back in those days when brown sugar was hard to find, bakers would use maple syrup as the most preferred and easily accessible sweetener for the early French settlers. The maple syrup was poured in a batter of heavy cream, eggs, butter flour and cheese with the Quebec spirit and poured inside the sugar cream pie. Due to the popularity of Tarte au Sucre, the delicacy is prepared and served all year round and it is a patent dish to be served at all holidays in all houses of Canada.