Mendi Harritsuak, edo besterik gabe Rockies, Kanadan hasitako mendilerro ospetsua da Liard ibaia, which lies at the northern end of British Columbia, and stretching till the Rio Grande River in New Mexico in the south-western part of the United States. They derive their name from a translation of what they were known as in one of the indigenous languages of Canada.

Tourists can explore the Rockies Mountains by visiting these parks and participating in such activities and sports as hiking, camping, mountaineering, fishing, biking, skiing, snowboarding, etc. Here is a list of the Kanadako bost parke nazional Rocky Mountains-en kokatuta daude and from where you can witness the scenic landscapes these mountains have to offer. Your Canadian vacation won’t be complete till you have visited at least one of these national parks nestled amongst Rockies.

Albertako Harritsuetan dago Kanadako parke nazional zaharrena, established at the end of the nineteenth century. Spread over some six thousand square kilometres, what you will find in Banff ranges from glaciers and ice fields, coniferous forests, and a stunning mountainous landscape. With a klima subarktikoa horrek negu luzeak, oso hotzak eta uda oso motzak, freskoak edo epelak izaten ditu, Banff da Kanadako neguko zoragarria. It is also one of the Ipar Amerika osoko parke nazional nagusiak, eta bisitatuenetako bat. Other than the park itself, you can also explore the peaceful town of Banff that’s become a cultural centre of the place; the hamlet of Lake Louise, one of the most picturesque lakes of Canada, with the famous Chateau Lake Louise nearby; and Icefields Parkway, a road that connects Lake Louise to Jasper in Alberta and where you’ll pass by many other beautiful, pristine lakes of Canada.

Beste parke nazional bat Kanadako Mendi Harritsuen Parkeak UNESCOren Gizateriaren Ondare, Kootenay is located in British Columbia. Apart from some thousand square kilometres of Canadian Rockies it also consists of some parts of other mountain ranges such as Kootenay and Park Ranges, as well as such rivers as the Kootenay River and Vermilion River. It has got many tourist attractions, mainly Radium Hot Springs, which is known to have an inconsequential quantity of a radioactive substance, radon, which is the decay left of radium; Paint Pots, a cold water mineral spring which is said to be acidic, which deposits a type of clay called ochre from which pigments are made which are used for making paint; Sinclair Canyon; Marble Canyon; and Olive Lake. You can view all of these attractions or go hiking or camping in the many hike trails and campgrounds in the park. You wouldn’t find such a unique tourist destination elsewhere, for where else would you find a hot spring, a cold spring, and icy rivers coexisting? Besides, the waterfalls, lakes, and canyons found here make for quite a scenic landscape.

The Kanadan eraikitako laugarren parke nazionala, Waterton is located in Alberta, bordering a national park in Montana in the United States. It is named after an English Naturalist, Charles Waterton. Stretching from Rockies Kanadako Prairies, which are grasslands, plains, and lowlands in Canada, Waterton is a relatively smaller park, spanning only some five hundred square kilometres. Although it’s open all year the peak tourist season here is from July to August. It’s picturesque landscape consists of lakes, waterfalls, streams, rocks, and mountains. In fact, it’s got one of the Kanadako Mendi Harritsuetako edozein lekutan aurkitu diren lakurik sakonenak. It’s known for the diverse wildlife that’s found here and also for the gorgeous wildflowers that can be spotted all over. It is also a UNESCO World Heritage Site, as part of the Waterton-Glacier Nazioarteko Bake Parkea. Tourists would find many trails here for hiking as well as mountain biking. 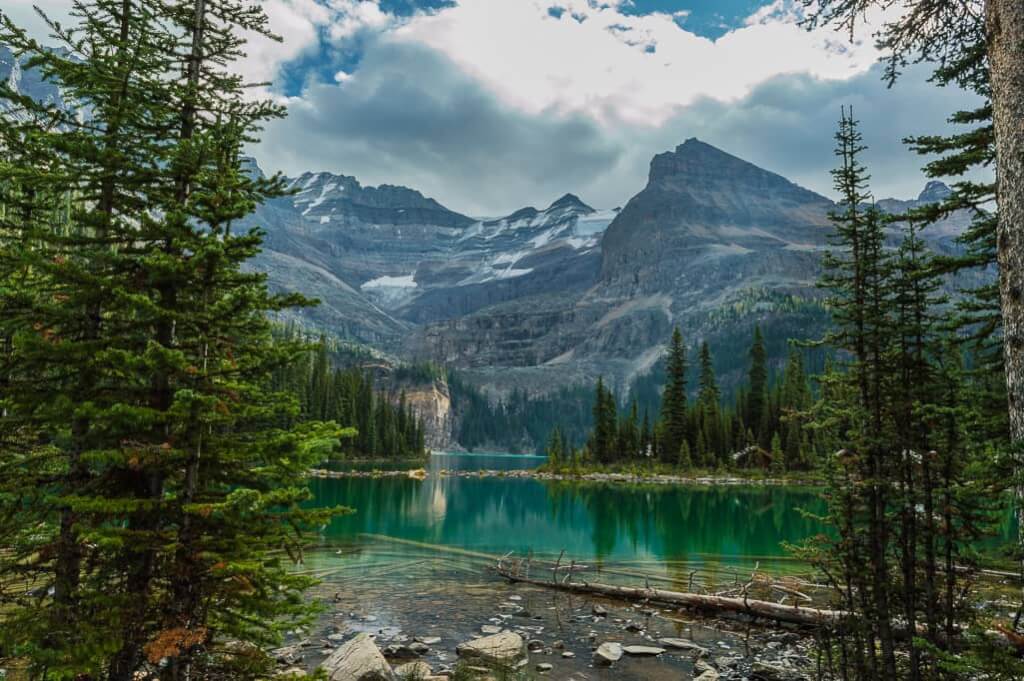 Mendi Harritsuetako parke nazionala, Yoho British Columbia-n dago Ameriketako zatiketa kontinentala, which is a mountainous and hydrological divide in North America. Its name derives from a Canadian aboriginal language and means amazement or awe. Yoho's landscape made up of ice fields, some of the highest peaks of the Rockies, rivers, waterfalls, and fossil deposits certainly deserves this title. One of the waterfalls here, Takakkaw erorketak, Da Kanada osoko bigarren ur-jauzirik altuena. Also part of the UNESCO World Heritage Site of the Canadian Rocky Mountain Parks, it’s a must visit place where you can do many things such as backpacking, hiking, camping, etc.