Must See Places in Toronto

The capital of the province of Ontario in Canada, Toronto is not only Canada's most populous city but is also one of the most metropolitan as well. It is the commercial and financial centre of Canada and like most urban cities of Canada, it is also quite multicultural. Situated on the shore of Lake Ontario, which borders the United States of America, Toronto has got it all, from a lakefront with beaches and green outdoorsy urban places, and a bustling downtown area with a happening nightlife, to some of the best art, culture, and food you would find in the country.

You might be visiting Toronto on a business trip or to meet friends and family and it would be a shame if you don’t explore the city while you are there. Its many tourist attractions and rich cultural life makes it a favourite of tourists in Canada. So here are some of the places that you must make sure to check out while on a trip in Toronto.

eTA Canada Visa is an electronic travel authorization or travel permit to visit Toronto, Ontario for a period of time less than 6 months. International visitors must have a Canadian eTA to enter Toronto, Canada. Foreign citizens can apply for an eTA Canada Visa online in a matter of minutes. eTA Canada Visa process is automated, simple, and completely online.

CN Tower is a world famous iconic landmark of Toronto as well as Canada as a whole. Standing 553 meters tall you can’t help but spot it when you’re in the city. Although it’s no longer the tallest freestanding building in the world when it was built back in the 1970s that’s exactly what it was. You can see the CN Tower looming over the city of Toronto from all possible spots in the city but you can also visit one of its observation areas at top or the restaurants it houses for a stunning view of the city of Toronto. In fact its highest viewing area, known as Sky Pod, even gives the view of Niagara Falls and New York City on days when the sky is clear. For adventurous souls there is a ledge outside the main pod where visitors can walk and enjoy the view. There is also a revolving restaurant called the 360 in which no matter which table you are sat at you can be guaranteed excellent views.

READ MORE:
In addition to Toronto discover other must see places in Ontario.

Museums and Galleries in Toronto

Toronto is one of Canada's cultural centres and as such there are many museums and galleries in Toronto that you must not miss out on . The Royal Ontario Museum is one of the most famous Canadian museums and it is also the largest museum in the world that showcases world art and cultures and natural history. There are galleries and exhibitions featuring the art, archaeology, and natural science exhibits from around the globe. Another famous museum in Toronto is the Art Gallery of Toronto which is the largest art museum not just in Canada but in the entirety of North America. It houses all sorts of famous artworks, from the masterpieces of European art to contemporary art from around the world as well as the very rich and budding Canadian art. Another interesting museum in Toronto is the Bata Show Museum which showcases various types of shoes from across the world and going back to different time periods and cultures. If you are a fan of the sports, especially hockey, you might want to visit the Hockey Hall of Fame. For those interested in exploring Islamic culture, the Aga Khan Museum is also a must.

The Toronto Entertainment District in downtown Toronto is Toronto’s Broadway and the place where the arts and culture of the city come alive. It’s filled with such entertainment venues as theatres and other performance centres. From theatre productions to films, shows, musicals, and any other performing arts, you’ve got it all here. One of the most famous cultural centres in the place is the TIFF Bell Lightbox which functions as the headquarters for the Toronto International Film Festival, one of the biggest international film festivals of the world. There are also cafes and restaurants for dining as well as the best nightclubs and bars in Toronto for a night of socialising. Other tourist attractions such as CN Tower; Rogers Centre, where baseball matches, football games, and concerts take place; and Ripley’s Aquarium of Canada are also located here. 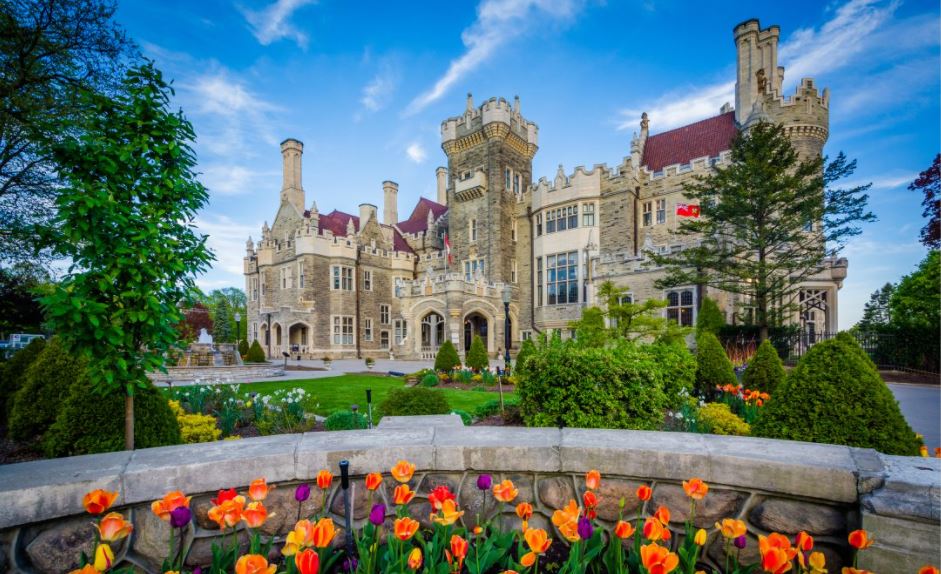 Casa Loma, Spanish for Hill House, is one of Canada's most famous castle turned into museum. It was built in 1914, its structure and architecture reminiscent of a Gothic European castle, with all of the splendour and opulence of such a building. It consists of a mansion and a garden and large grounds including a tunnel connecting to a hunting lodge, and the stables. The interior of the mansion includes many rooms, such as the one called the Oak Room, previously known as the Napoleon Drawing Room, with an ornamented ceiling and a light fixture reminiscent of Louis XVI’s court. Not only a museum open to public, Casa Loma has also been a popular filming location as well as a popular wedding destination in Canada.

High Park is the biggest municipal park in Toronto with its grounds consisting of gardens, playgrounds, a zoo, and also areas that are occasionally used for sporting, cultural, and educational purposes. It is thus both a natural park and a recreational one. It's got a hilly landscape with two ravines as well as several creeks and ponds and a forested area. The central part of the park is one of Canada's many Oak Savannahs which are lightly forested grasslands with oak trees. There are also such interesting places located on the Park’s grounds such as a historical museum and an amphitheatre and even a restaurant. Many parts of the Park are full of Japanese cherry trees which beautify the area like nothing else could.